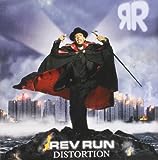 I love classic hip-hop. With some exceptions, the best commercial stuff coming out today cannot hold a candle to what was produced up until - oh, I don't know - 1993. Run-DMC introduced me, along with every other white suburban kid, to the genre. So, when I saw Rev Run's solo debut Distortion on Best Buy's shelf, I thought "Hell, yeah!"

Now, Run-DMC are not infallible (Crown Royale, anyone? Thought not.), so there's a chance that this album could suck royally. But I'm lovin' it! It felt almost like I was listening to my brother's dubbed copy of Raising Hell (but, not quite). Run's on fire, although I'm accustomed to him trading lines with DMC. His presence is definitely missed. Same with Jam Master Jay's cutting and scratching. Refreshingly, there's only one producer (Whiteboy) and he channels Rick Rubin effectively. Until Rubin returns to hip-hop full time, Whiteboy will have to keep his seat warm. No guest MCs. No skits. Just good, positive hip-hop.

My complaint: at 27 minutes, it is ridiculously short and leaves you wanting more. But I picked this up for $8, so I don't feel ripped off. Also, Run's new image with the cape: kinda silly.
Posted by Micah at 10:09 PM

y'all know what time it is: this is ruuuuuuuunn's house!
once again my friend,
not a trend to end,
they said rap was crap...
(fill out the rest of the lyrics. i ain't looking them up.)

talk about old school. a 'reverend' with a cane, cape and top hat only means one thing:

He's not a magician until he's made the cover of the latest "Poof" magazine.

with his long caddy (like a seville, and written on the side, it says "dressed to kill.") and his many female, um... assistants.

can't believe i'm making pimp jokes about run, after he becomes an ordained minister (if the G-O-D be in me, then a king i be).

Hey, he's still got style. One line from the album: "You ain't never seen a Reverend that's sittin on dubs."

yes, unfortunately, we have.

and, not to forget, bodyguards.

Lordy. first it was funny. now, i'm just getting upset.